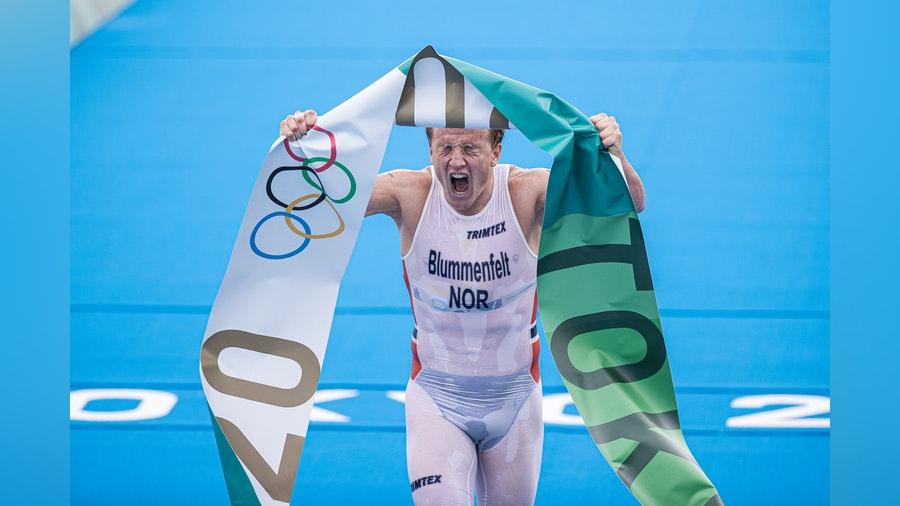 fter more than a decade of meticulous planning with his team, it was Norway’s Kristian Blummenfelt who was crowned the men’s Tokyo 2020 Olympic Triathlon Champion on Monday morning on Odaiba Bay, delivering one of the most gutsy runs possible to take the tape with a roar, at the end of a truly epic battle of wills.

For much of the run, Great Britain’s Alex Yee looked like he might just continue his remarkable rise all the way to the top of the triathlon tree, only for the inimitable Norwegian to put in one final and ultimately decisive charge, New Zealand’s 23-year-old Hayden Wilde hanging tough for a hard-earned bronze.

“It is a moment that I have been dreaming about for so many years,” said a thrilled Blummenfelt. “To be able to put it together on the day is something I am really proud of. It is a strange feeling coming into the last 100 metres and knowing that I had victory. It was quite a similar tactic as in Yokohama eight-weeks ago and also in Lisbon. I don’t really have the leg speed if we came down to the blue-carpet with Alex and Hayden so I knew I had to try and go really hard for five minutes all out and hopefully that would be enough to break them. It was such a good feeling when I got a little gap and I just had to make sure it was big enough, even for the last few hundred metres.”
—

With the air and water temperatures in the high 20s and the pre-race tension on the pontoon cranked up even before an invalid start called the athletes back, the race got underway with Chile’s Diego Moya spearheading the opening strokes alongside Jonas Schomburg (GER).

By the end of lap one, though, the familiar sight of current World Champion Vincent Luis (FRA) was enjoying the clear water out front, Tayler Reid (NZL), Henri Schoeman (RSA) and Jonathan Brownlee (GBR) along with the youngest man in the field Oscar Coggins (HKG) in 10th place as the athletes came back up onto the pontoon and dived back in for the shorter 550m second lap.

USA’s Morgan Pearson was 20 seconds back at that point but would miss his kit box with the swim cap in transitioning to the bike and have to serve a 15-second penalty at the end of the run. Yee was 22 seconds back after a great swim, Hayden Wilde (NZL) 38 seconds with Javier Gomez Noya and Mario Mola (ESP), but just a minute separated the entire field.

Out front on the first bike lap, though, it was Luis, Schomburg, Schoeman along with Casper Stornes (NOR) and Dmitry Polyanskiy (ROC) right onto the power and pushing the pace.

First Marten Van Riel (BEL) bridged up and a group of nine formed with Jonathan Brownlee (GBR), Kenji Nener (JPN) and Canada’s Tyler Mislawchuk well set in there, too.

Blummenfelt was already pushing to bridge 15 seconds back after the first of the eight laps, Hayden Wilde in a group with Gomez, Mola, Max Studer (SUI) and Syria’s Mohamad Maso a further 25 seconds off.

After three laps, the packs started coming together, Bence Bicsak (HUN), Leo Bergere (FRA) and Jacob Birtwhistle (AUS) working to close in on the leaders and, by the halfway mark as they merged, Luxembourg’s Stefan Zachaus was the first man to roll the dice.

It didn’t last long and once Zachaus was reeled in there was only 10 seconds between the top 39 once Schomburg dropped back. In that group were the imposing figures of the full Spanish trio Mola, Gomez and Fernando Alarza, Norway’s Stornes, Blummenfelt and Gustav Iden, Canadians Tyler Mislawchuk and Matthew Sharpe and Australia’s Matthew Hauser, Aaron Royle and Birtwhistle.

The pace slowed and Switzerland’s Andrea Salvisberg took the race on so, at the bell, he had put in 20 seconds over the pack. That was down to 14 seconds out of T2, though, and soon in close pursuit were Stornes and Reid, Brownlee and Yee, USA’s Kevin McDowell and Japan’s Nener.

Salvisberg was quickly caught by Yee, himself with Wilde and Blummenfelt on his shoulder and another Swiss, Max Studer right with them. The Brit took the first lap out front with Wilde on his shoulder just as he was for WTCS Leeds, before Dorian Coninx (FRA) moved into pole position briefly, Blummenfelt and Brownlee, van Riel and McDowell there as Mislawchuk dropped a few yards back to join Luis and Nener off the pace.

Coninx was next to be dropped as they came back through transition at the halfway point, Mislawchuk now adrift of a podium chance 13 seconds off, Mola going well but 27 seconds back with Birtwhistle and Iden.

At the bell it was Wilde looking the smoothest of the six in contention as Stornes fell off the pace, then Blummenfelt made his first move, leaving the New Zealander next to be shaved out of gold contention. Yee responded immediately and resumed the lead in a bid to break the Norwegian, but this was the moment that the last 12 years had all been leading up to for Blummenfelt.

With 1km still to go, the hammer was put down for the decisive last time. Yee battled but couldn’t respond in kind, and it was to be Norway’s mighty Kristian Blummenfelt who powered down the blue carpet for the last time and roared as he took the Olympic tape.

““For me, I just wanted to run the best 10-km I could,” said Yee. “Leaving the bike, I didn’t feel amazing honestly, I kind of had my poker face on. I knew my strength lied in my leg speed, and I just tried to pick that up where I could and played to my strengths. So yes, I was really pleased to come away with second, honestly. Kristian was the better man on the day and I am really pleased.”

“Coming into the third lap there was still probably eight of us so there were some absolute animals in that group and it could have been anyone’s game,” said Hayden Wilde. “After a few attacks, it was left to the last three of us. We all looked at each other and we had our poker faces on behind our glasses and I actually remembered when I raced Alex, a couple of months ago in WTCS Leeds, he was really aggressive around the corners, so I thought I am not letting him go round those corners as fast as last time. With Kristian, I remembered watching him race when I was in New Zealand in lockdown, doing that exact move in Yokohama and I was waiting and then thinking ‘there it is’. The man definitely deserves that gold medal, he was storming it on the bike as well. No feet out of the front of the pack, didn’t hide, just did everything on the front and kudos to him.”