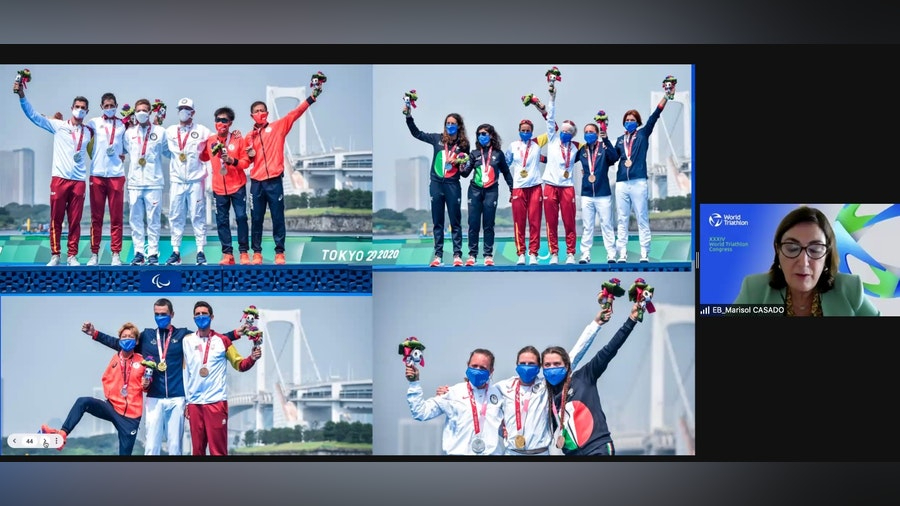 During three days of virtual meetings and culminating with Sunday’s 34th Congress, World Triathlon’s committees, commissions, National Federation members and their Continental Confederations came together to lay out the blueprint to take triathlon to new heights of participation, competition and sustainability over the coming years.

At the end of the in-depth President’s report reflecting on Tokyo 2020 and the challenges of the pandemic, Marisol Casado addressed the Congress with a simple promise: “To be ambitious and to do the very best for our sport and its athletes.”

Sunday was preceded by a full day of meetings of the 14 World Triathlon Committees and Commissions, that included the first reports from the new Equality, Diversity and Inclusion Commission and the NOC Relations Commission. There was a commitment to restructuring the Sustainability Commission in order to build upon World Triathlon’s award-winning event-hosting guidelines and event certification established pre-pandemic, and to help ensure the 50% reduction in CO2 emissions by 2030 is on track as the event calendar returns to normal. All member NFs are invited to put forward experts in the field for consideration by the Executive Board for a place on the commission.

Speaking after also attending the ANOC General Assembly in Crete on Sunday morning, President Marisol Casado said; “It is gratifying to hear IOC President Thomas Bach’s commitment to sustainability matches those of World Triathlon so that together we can work to find new ways to combat the environment and sustainability challenges facing the planet and in which sports governing bodies have such a leading role to play.”

The inclusion and exclusion of a number of member National Federations was voted on by Congress, the results of which sees World Triathlon membership now stand at 165 full members.

The robust health of the World Triathlon financial position despite the impact of the pandemic was outlined by auditors PwC. A swift response at the start of the pandemic and the reduction of expenditure across all departments of World Triathlon were highlighted as key to minimising the decrease in income in 2020 through the lack of events and postponement of the Tokyo Olympic Games.

The former Vice President Loreen Barnett, an instrumental and guiding figure in the formative years of what was the International Triathlon Union and bringing the sport into the Olympic programme for the first time at Sydney 2000, was elected an Honorary Member of World Triathlon.

Lotta Johansson (SWE) was announced as the winner of 2021’s Award of Excellence after the most nominations ever received for the prize that recognises outstanding work to promote women’s involvement in the sport of triathlon and para triathlon. Lotta has been a driving force behind the Swedish triathlon movement for more than 25 years.