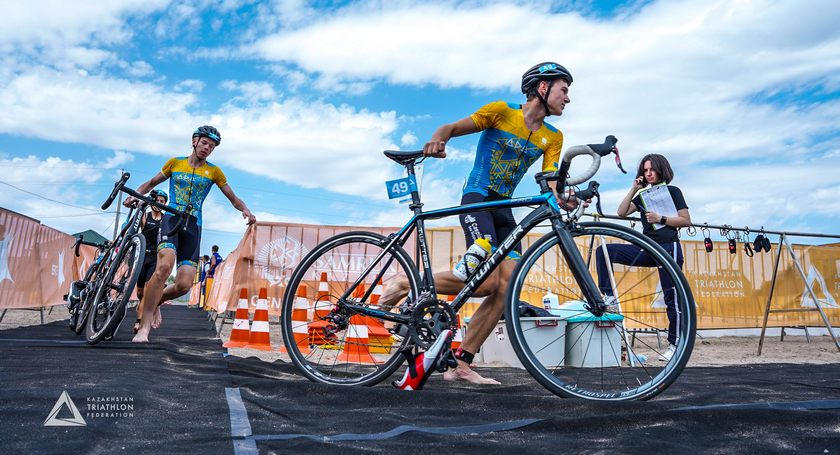 Today in Kapshagay the second competition day within the framework of the Open Triathlon Championship of the Republic of Kazakhstan ended. A total of 95 athletes of different categories from Nur-Sultan, Almaty, Shymkent, Akmola, Kostanay and Turkestan regions entered the start line.

The Kapshagay weather, in comparison with yesterday, contributed to a comfortable start and the swim was not cancelled. All participants covered the super-sprint distance - 300 m swim, 8 km bike and 2 km run.

Anuar Turubaev from Almaty demonstrated his superiority over the opponent. Anuar won the Elite race in 24:31. Semyon Pivovarov (Kostanay region) lost more than two minutes to him and took second place.

Daria Bychkova (Almaty) competed for Elite-F and showed the result - 29:43.

Competitive and interesting struggle took place among the unders. In the U15 category, once again, Diana Yerzhanova showed her excellent preparation, who finished in 28:06. Note that the athlet of the Nur-Sultan Triathlon Federation Diana Yerzhanova won all the starts in which she performed this season, including the CATA Cup 1st stage in Tashkent. The second and third places were taken by representatives of the Akmola region - Yuliana Petrova (29:46) and Anel Isabayeva (30:02).

Alinabi Maralbekov (Nur-Sultan) won gold in this category with a score of 26:07. The silver medal won by Timur Bakirov from Akmola region (26:39) and bronze by another Nur-Sultani athlete Kuanysh Bekenov (26:41).

In U17, another athlete from the capital, Eva Pinchuk, won the race among girls (30:21). The second place was taken by Anastasia Zakharova (Akmola region), 30 seconds behind her opponent. Milena Saprina from Almaty closed the top three. Her final time is 31.04.

In the U19 category, the gold was taken by a member of the junior national team Aruzhan Amanzholova (Turkestan region) with a result of 30:46. The second place is occupied by Hafiza Gulturayeva (31:21).

The competitive race was shown by the Almaty triathletes, who fought for the podium in U19. The fight at the finish line was won by Daniil Porodnov with a time of 23:41. Stepping on his heels, Alexander Ten finished the race with a result of 23:43. A second later, Yegor Krupyakov crossed the finish line (23:43).

Yulia Ozerova competed in the U23 category and finished in 28:01.

Alikhan Abuseit (Shymkent) won the race among U23-M (24:06). Almaty resident Kirill Rozhkov is on the second line (24:41). The third was Yerasyl Amanzholov (Turkestan region), 50 seconds behind the leader.

It should be noted that the event was held without spectators in compliance with all sanitary requirements. All participants and organizers were admitted to the event area with negative PCR test results.

The results of all athletes are available on the KTF official website.