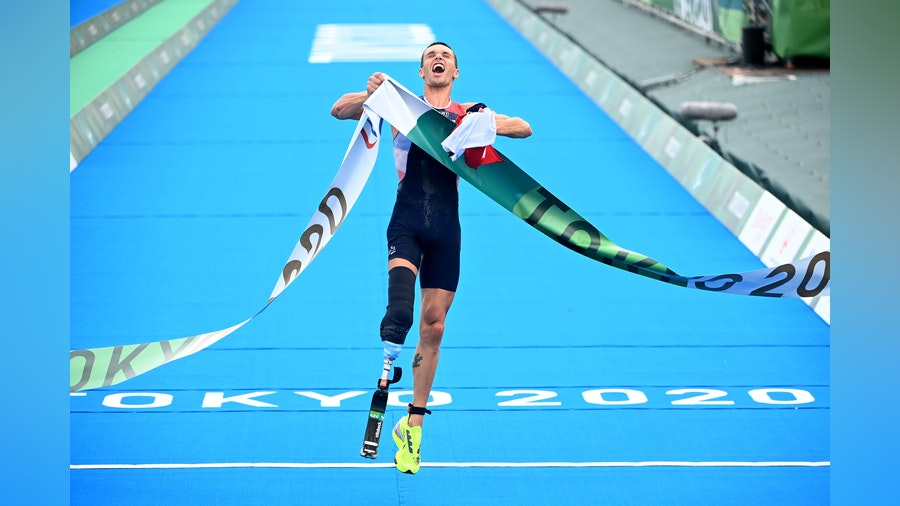 The morning started early on extremely humid conditions at Odaiba Bay with 10 men lining up in the PTS4 class for a sprint distance race: a single 750m lap of the Bay, followed by four 5km laps of a flat and technical bike course towards Ariake Tennis Park then heading north over Fujimi Bridge and doubling back towards Odaiba. The final run segment will see four laps of 1.25km, finishing in front of the grandstands on Odaiba Beach

Once they were on their bikes, it was clear that Hanquinquant was a man on a mission: the Paralympic gold. And he did deliver. Behind him, Spaniard Palomero went full gas to chase the British, and it was only a matter of one lap to not only chase him, but leave him behind. In fourth place, China’s Jiaochao Wang was struggling trying to stay in the fourth place after a swim that proved t be exhausting for most of the athletes.

The 20km bike course was once again another magnificent display of Hanquinqnat, opening a gap of over two minutes with Palomero even if riding solo for the whole bike course. Behind him, the Spaniard was able to show great bike skills even with just one arm, and in a technical circuit like the one in Tokyo, with multiple turns. Behind the two leaders, Taylor was clearly suffering after a tough swim as well, and it was Wang who positioned himself in third place before heading onto the second transition.

When it all came to the run, it was clear that no one could stop Hanquinquant, who even despite a small fall during the run, managed to cross the finish line all smiles to claim his first ever Paralympic gold medal, and also with one of the biggest leads in Para triathlon history. It was almost four minutes after when Hideki Uda, one of the best runners on the field, crossed the finish line in second place, to give his home nation, Japan, its first ever Para triathlon medal at the Paralympic Games.

The third place was for Palomero, cheered by fellow athletes when he was running the last meters in the blue carpet before crossing the finish line, while China’s Wand and Antonio Franko (CRO) crossed the top five.

One of the newest athletes of the field, Eric McElveny, finished in 6th place and Jorge Fonseca in 7th, followed by Michael Taylor, Jamie Brown (USA) and Mikhail Kolmakov (RPC).

“Today was just incredible”, said Hanquinquant after crossing the finish line. “Today was a really hard day, with the humidity. To swim and to bike was OK, but on the run I really struggled. This is a dream for me. The people here in Japan are fantastic, always supporting. Thank you so much to everyone, and I hope to repeat this in Paris”, he said.

“I am extremely happy. Just to be able to compete with such incredible rivals is just an honor”, said Uda.