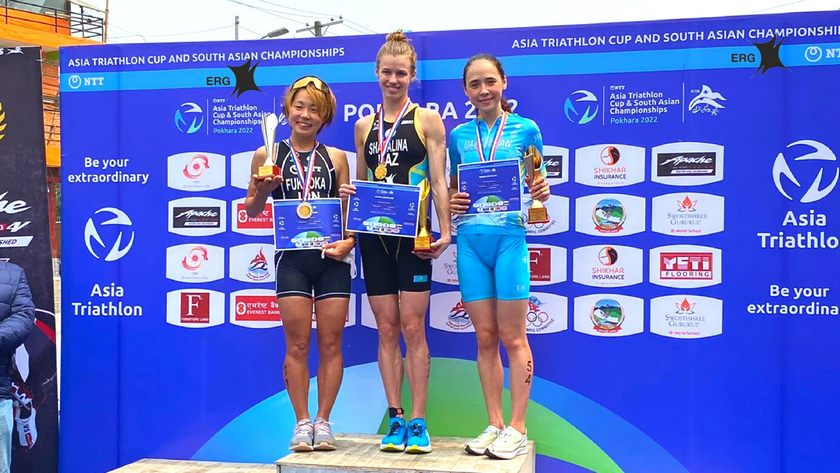 Today, the Asian Cup and the South Asian Triathlon Championship were held in the Nepalese city of Pokhara. 63 athletes from Austria, Bangladesh, India, Kazakhstan, Poland and Japan took part in the event.

Participants competed for prizes in the sprint distance. They swam a 750m program in the Phewa River, rode a 20km cycle race and ran the final 5km around the famous Basundhara Park.

In the difficult race of the Nepalese race, Ekaterina Shabalina was able to surpass her main competitors - the Japanese. As a result of the race, Ekaterina won first place, finishing with a time of 01:02:20. Nadezhda Bekmaganbetova took third place and was awarded a bronze medal. Her final result is 01:04:14. Yulia Ozerova (01:05:51) finished in fifth position. The Kazakhstani podium was diluted by the Japanese Hiraku Fukuoka (01:02:53).

In men, Daniil Zubtsov (00:58:20) finished the race in seventh position, Alikhan Abuseit (00:58:25) in eighth. A little luck was not enough for Kirill Rozhkov, who had a punctured tire when he was driving in leading positions and had every chance to compete for a place among the winners.

“The race went well. At this start, the athletes, without exception, coped with the task. None of the athletes made any gross mistakes. Nadezhda Bekmaganbetova skillfully took advantage of the mistake of her competitor from Japan and took third place, as we predicted. Ekaterina Shabalina fulfilled all the coaching instructions: she swam among the leaders, controlled the race on the bike stage, from the first kilometers of the race she created comfortable conditions for herself and won. For the guys of the youth team Daniil Zubtsov and Alikhan Abuseit it was the first race of a high level. After analyzing the start list, we expected them to place from 5 to 10, and so it happened. Kirill Rozhkov swam out in the lead, but on the 8th kilometer of the bike stage there was a puncture and he had to finish the race ahead of schedule. Such failures happen at big competitions and no one is immune from them,” commented KTF Secretary General and Head Coach Maxim Kriat.

“Today's prizes are the result of the coaching staff great work. I want to thank Nazarbayev University for providing a base for training, where the team spent the entire winter off-season. I also thank the team of the Kazakhstan Triathlon Federation, which performed such invisible work as organizing training camps, sending teams, etc. Yes, this is invisible work, but it is very tangible. Next, we will prepare for the Asian Championship in Korea. There, our team will already see favorites and main contenders for victory.”

The main continental triathlon championship is scheduled for June 4 in Sejong (South Korea).

Congratulations to our athletes on their victory!